The Invention of Lying: 4.0 Stars 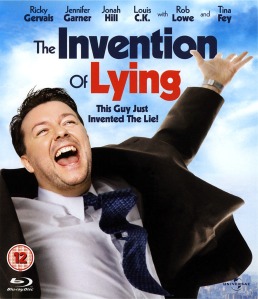 Last week I spent two days away from home on a ‘business trip’, talking about how to revolutionise the support of environmental volunteering in the UK.  I had to stay in a hotel in Leeds.  I selected the cheapest one I could find, the Discovery Inn.  It was fine, if a bit warm; then again, I can sleep just about anywhere.  The reception desk was on the third floor, which was kind of weird, so I had quite an adventure in the hotel even before signing in.  All those lifts, staircases and corridors, it was like a really rubbish role-playing game, not a dwarf or gelatinous cube to be seen. The nearest I came to finding a ‘monster’ was when I finally got to reception, where a guy was hassling the chap behind the counter for a different room, because his was too noisy.  It’s the middle of Leeds, the third largest city in the UK; what did he expect, total silence broken only by the occasional hoot of an owl?  And I’m not suggesting that the hotel was seedy or anything, but I had to pay a £10 deposit to get a remote control for the TV in the room so I could watch it.  My room’s en suite bathroom was quite large, with the sort of flooring you could throw water all over without it causing a problem.  All the walls were covered in really large, really bright, white tiles.  It smelt a bit of cleaning fluids, appeared to be antiseptically clean and had the sort of acoustics that an alpine mountain range would pay good money for.  It reminded me of a morgue.  It was the sort of bathroom in which an axe murderer could kill someone and then easily clean up the mess afterwards.  In fact, given all the shouting coming from one of the rooms near mine at one point, I think that’s exactly what was happening.

I really liked this film.  Any film featuring a fat loser who ‘gets the girl’ is assured of my vote, even if this does clearly identify it as a work of fiction.  I also liked it because he’s basically a decent guy, who doesn’t suddenly become a megalomaniac or power-mad psychopath when he finds out he has a unique gift.  (Unlike “Limitless” or “Chronicle” for example, to give two recent examples).  Sure, he does exploit it a bit, but not in a really bad way.  He also gets the girl without much in the way of cheating either.  Despite our showing in the Olympics and Paralympics, us Brits do like a loser, especially one who comes good in the end.  More negatively, I couldn’t quite work out why some characters couldn’t stop themselves from blurting out stuff that really didn’t need to be blurted out; not lying is one thing, but saying bad stuff about people that doesn’t need to be said just for the sake of it, is a bit mean.  This film also seems to have become quite controversial, due to its atheist leanings.  In fact I could probably write pages and pages about this subject, but frankly I’d rather just watch and enjoy it as a fun, gentle comedy.  It’s actually quite a moving film.  The scene in the hospital manages to be both funny and heart-wrenching at the same time; it made me cry, but then it’s not been that long since my mum died, so it probably had more resonance for me that it might otherwise have had.

Recommended for losers who want a good role model.  Or those who think Ricky Gervais is a comedy god.

Top badass moment?  Fat loser Mark getting the beautiful girl.  That is so totally badass, (if highly improbable).  What a shame it never happens for real.