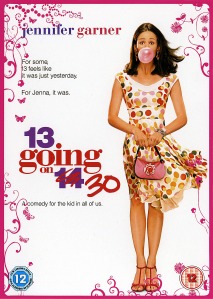 Jennifer Garner (“Daredevil”, TV’s “Alias”) and Mark Ruffalo (“Eternal Sunshine of the Spotless Mind”) star in this hilarious flash-forward romance about a pre-teen girl who goes from geek to glamorous.  With the help of some magic wishing dust, 13 year-old Jenna Rink (Garner) becomes 30 and gorgeous overnight, with everything she ever wanted, except for her best friend Matt (Ruffalo).  Now, this grown woman must create some magic of her own to help the little girl inside find the true love she left behind.

Went to see the New Town Kings last night at the Camden Underworld in London.  It’s probably the best ska band in the country.  (Quite why people listen to stuff like Coldplay when they could be listening to bands like the NTK entirely escapes me, but I think it’s probably just another symptom of the fall of humanity; the signs are all around us after all, this is just another scream of terror from the depths of hell into which we’re falling.)  The gig was great, had a little bit too much to drink but managed not to be too uncoordinated or tread on too many feet.  I really like going to gigs in the summer, as when you leave at the end in a sweat-soaked t-shirt, you don’t walk out into a dark night that has a wind chill that wouldn’t feel out of place in an Antarctic winter.  I hate that and hanging about at Paddington Station afterwards, waiting for a train that’s either packed and you can’t get a seat, or freeing cold.  (I know it’s partly my fault as I wear the same things all year, but cloakrooms are a pain so if I can’t wear it under ‘combat conditions’ or tie it around my waist, then it’s too much hassle.  I’m sure regularly undergoing a freeze-thaw cycle is good for something; it’s good for some seeds anyway.)  Have to say I’m feeling pretty fit at the moment.  I remember seeing NTK a couple of years ago and I was knackered at the end.  This time it didn’t feel that big a deal.  I truly have the body of top sportsman!  (Darts probably).

I can’t believe it, but this is the fifth comedy I’ve watch in a row.  What’s come over me?  Then again, I do choose the films I watch entirely at random, although there are a lot of complicated rules that govern this process, but at the end of the day it’s still pretty random.  Anyway, let’s not consider how clichéd or stupid this film is.  Let’s just consider it and its (I think for me) unique, pink DVD case.  To deflect the fact and consequent embarrassment that comes from my sitting and watching a chick-flick on my own, I like to consider this as a movie with a hard science fiction storyline, that just happens to have some sort of romance built into it somewhere.  We first meet our hero Jenna around the time of her 13th birthday, just before she travels about 27 years into the future, into an alternative time-line.   So okay, the ‘time-machine’ consists of some sort of ‘fairy dust’ that we never get an explanation for, but that’s the nature of these things, apparently.  Then in the future she does stuff and it all works out okay.  Right?  It is actually an excellent film, even though it’s rubbish too; I did feel myself getting emotional once or twice, (just a tiny bit of course).  It also has one of those brilliant, so-crap-it’s-good dance routine scenes in it; Michael Jackson’s “Thriller” being the victim in this case.  (You should check out all the people at IMDB seriously discussing how realistic this scene is and how poor the choreography is; and I thought I had trouble living in the real world sometimes.)  Technically I like how this film looks and sounds on DVD.

This movie uses it’s soundtrack to strongly emphasise its 80s vibe.  In this, thanks in part to the way the sound blasts out every time a song is played, it succeeds well.  Even I have to begrudgingly admit that it’s not that bad.

Recommended for magazine editors, freelance photographers, 13 year-old girls and anyone who thinks 80s pop music is of any value; (yes, you there at the back, I can see you).

Top badass moment?  Biach Tom-Tom getting her comeuppance.  So she gets a drink spilt on her, a few harsh words and some work ripped up in front of her face; but when you’re 13 and have a social position to maintain in front of your friends, that’s probably not dissimilar to having your head blown off with a big gun by the unsung hero in the climatic final scene in a bloody action film.