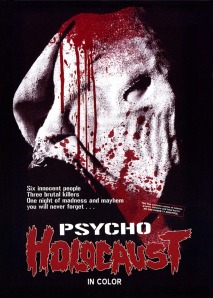 Eager for one final vacation before their lives change forever, six friends embark upon a camping trip to a remote mountainous area.  By nightfall, their lives will change forever… in ways too horrific to imagine.  For in the shadows awaits a pack of the most evil, vicious rejects of humanity, addicted to violence and thirsty for blood!  This is “Psycho Holocaust”…

I’m not just an uncouth, middle-aged yobbo, who only listens to angry punk music and watches slasher movies.  No, I also have a cultured, respectable side, the sort that The Queen would be entirely at home with.  In proof, I offer up the fact that I’ve just finished reading “The Hand of Ethelberta” by Thomas Hardy, not for the first time either.   In between reading Star Trek novels I read Thomas Hardy ones.  The latter is of course, the greatest writer the world has ever seen.  In fact I’m a fully paid-up member of the Thomas Hardy Society.  That’s how cultured I am.  Unlike “The Terminator” Sara Connor’s “No fate but what we make”, Hardy’s novels generally provide more of a ‘fate will do whatever it wants with you, despite your best efforts to do otherwise, and you probably won’t like it either’ point of view.  Even though it’s one of Hardy’s more light-weight stories, “The Hand of Ethelberta” once again provides us with a reminder that it’s basically pointless trying to do something about your lot in life, or dream about bettering yourself.  When it comes down to it, you might win a few battles, but the war will be lost.  I find Hardy an excellent counter-balance to the optimism and can-do attitude prevalent in Star Trek. Together, they help to keep me grounded!  This movie is more Thomas Hardy than Star Trek.

“Six friends embark upon a camping trip to a remote mountainous area” eh?  I wonder what on Earth this film could be about?  Ornithology?   Geology?   Photography?  Actually, it features three veterans of the conflict in Iraq, in a searing and damming documentary about the effects of combat on individuals and the political implications of going to war.  Okay, I lied a bit.  It does indeed feature three veterans (and one was a documentary film maker), but then it all sort of goes where a million low-budget horrors have gone before.  In its favour, our six ‘heroes’ weren’t teenagers and even the three war veterans displayed a clear lack of fantasy indestructibleness.  (Cool, a six-syllable word that Word approves of.)  The latter also exhibited a genuine concern for their local environment, (an attractive woodland).  It was heartening to see a couple of sick and twisted psychos busy taking two of their victims off to a location to kill them in, discussing an impending plan to turn the area into “one big fucking suburb”.  A small quirk of fate and they’d have been running about, carrying out direct action in the name of Earth First instead.  That’s the ‘Hardy Effect’ for you.  The violence is well up to scratch and some (though not all) of the special effects are generally pretty believable.  The lead baddie is suitably effective and entertaining, even though he did look a little too like Simon Pegg to be totally convincing.  I kept expecting him to pick up a pile of LPs and use them as weapons.  Despite the occasionally horrific bit of acting, the film works well as a B-movie and the violence scores highly on the official sick-gross-eew scale.  Turning to health and safety now, a number of different tools get used in the film, including two carpenter’s saws, a claw hammer, a few hand axes, a double-headed axe and a sort of flat bladed butcher’s hatchet, as well as a chainsaw.  By and large, these were used in a generally appropriate and certainly effective way, although the arm that was cut off wasn’t really secured properly and the no-handed use of one of the saws isn’t a formally recognised technique.  (You may wish to give that some further though.)  Unfortunately, as is often the case, the chainsaw was used with little or no attention paid to safety.  I couldn’t see any PPE in use and even an idiot must surely realise that running about in a woodland carrying a running chainsaw, over uneven terrain full of trip hazards, isn’t a terribly good idea.  It never fails to amaze me how few chainsaw wielding psychos use their equipment safely.  Particularly in this case, considering the latter were ex-military; this was disappointing and certainly made the whole movie feel a lot less realistic.  However, it did seem to start really easily, from both hot and cold, so at least it looks like it was being maintained properly, which is promising.

1 cat, 1 chainsaw and 1 decapitation.  Bingo!  The first film I’ve watched for ages that gets a full set.  (I think the cat was just a bystander that ran onto the set though.)  There’re a few other rather painful amputations too.

Top badass moment?  It’s certainly a gentleman’s leg-crossing moment, but Laura’s treatment of her would-be rapist was pretty awesome; I’m just not sure how feasible it would be in real life (so says Mr. Modest-Bigboy).  It wasn’t that she’d had an especially good day up to then either.  A whipping, a drowning, another rape, a bashing on the head with a big rock and finding her boyfriend missing a leg, (who then promptly fell on her when she tried to help him, trapping her), do not a good day make for anyone.  And let’s not forget her safe and effective use of the double-headed axe too.