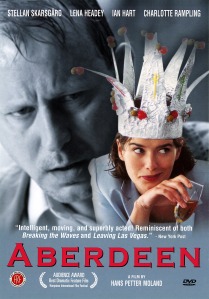 Kaisa (Lena Headey), a beautiful and feisty Scottish woman, finally has her life together, at least until her mother (Charlotte Rampling) asks an enormous favour; to bring back to her Kaisa’s estranged larger-than-life father (Stellan Skarsgård).  The two of them, father and daughter together, set out on a wild, brutally funny yet heartbreaking journey, which takes them through their emotional past before reaching their ultimate destination.

Despite being a lowly nobody at work, a combination of staff sickness and annual leave yesterday meant that all the more senior staff with direct line management responsibility for me weren’t in.  Taking advantage of my self-appointed, temporary CEO role, I finally got to order that Aston Martin V12 Vantage S I’m always on about.  I knew my recent ‘job enrichment’ as “An Authoriser” would come in handy.  With this new company car, I’ll soon be making better use of my valuable time, by utilising its top speed of 205m.p.h.  (I spent over six hours driving today, mostly on the M25, covering a little over 200 miles in that time; it would’ve only taken me an hour in the Aston.)  I haven’t been able to find out much about it fuel consumption or exhaust emissions, but luckily it’s got a catalytic converter so I’m sure it’ll be really good for the environment too.  I can’t wait for it to be delivered.  I imagine the optional, 1000W Bang & Olufsen BeoSound with ICEpower technology audio system I’ve included in my order is pretty good as well.  This film features a decent car, but it’s not an Aston Martin.  I should have watched a James Bond movie instead.

I’ve been to Aberdeen.  It’s gray, depressing and bloody cold.  It’s so cold even ice tries to avoid the place.  The fact that many years ago I got dumped there by the most beautiful woman on the planet (although with hindsight she was clearly way out of my league), has no bearing whatsoever on my opinion of the place.  I’m nothing, if not a consummate professional when it comes to giving factual, well-balanced information about things.  (I remember the two of us building a huge snowman in a park.  A short time later as we walked past it again, we saw some little bastards abusing it.  They had just pushed its head off, in what turned out to be a remarkably accurate metaphor for our future together.)  This is an amazing film that features the relationship between a father and daughter, two emotionally damaged individuals; one an alcoholic and the other a successful solicitor who’s seemingly lost the ability to love anyone.  It’s essentially a road-trip movie, in which the daughter has to go from London to Norway to collect her father and then transport him to Scotland.  I like films like this, as they me feel better about myself.  Lena Headey and Stellan Skarsgård, who seem to turn up in quite a few films I watch, both put in wonderful performances and manage to make their characters sympathetic and somewhat endearing, despite their not being very nice people.  I really did end up caring about what happened to them.  If it has a fault, then it’s that some of the situations they run into on their journey just seem a bit too random and strange.  This is an emotionally tiring film to watch, but worth every second.  The trailer really doesn’t do it much justice.

To be brutally frank, the soundtrack’s unlikely to result in a circle pit in your living room.  However, I don’t think that was the intention.  Like most things about this film, the music works and really enhances the scenes its used in.

Top badass moment?  I’ve never been an alcoholic; I don’t have the time or the money.  So I’ve never experienced what it’s like.  Tomas is an alcoholic and spends most of the film very drunk.  However, he does manage to go into a bar at one point and drink just water.  I’d imagine that’s pretty hard to do when you’re an alcoholic.  That’s badass.