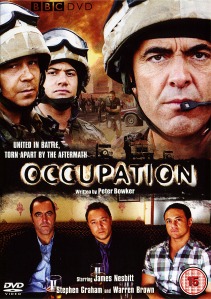 This powerful, compelling drama traces the fraught interwoven journeys of three British soldiers who take part in the invasion of Iraq in 2003, return to Manchester, but are then inspired to revisit the chaos of Basra.  Danny, Mike and Hibbs, friends in the same army regiment, have their own very different reasons to return.  Danny (Stephen Graham) sees rich financial pickings in private security work, in a land awash with billions of dollars of reconstruction money.  Mike (James Nesbitt) has fallen in love with Iraqi doctor Aliyah.  Hibbs (Warren Brown) goes back because he believes in the mission to rebuild the country and help the Iraqi people.  Life in the new Iraq however is unpredictable, chaotic and dangerous.  Over the course of five years, the friendship of the three men comes under fierce pressure, as they pursue their dreams against the backdrop of growing fundamentalism, sectarian violence, and corruption in the world of privatised security.  Occupation is a darkly humorous and emotionally involving story, which slowly builds to a gripping and moving finale, as their conflicting ambitions come to define not just their own lives, but the war and the occupation of Basra itself.

I went to see Bad Religion last Tuesday at Camden Koko. Whilst standing in the queue waiting to go in, (no thanks to the Tube, which thought it would be funny to have no trains in either direction running to Mornington Crescent), someone was handing out flyers for other gigs.  After having one of these shoved into my hand, I took a brief look at it.  FFS!  What do I see on the front but concerts by Barry Gibb, Rick Wakeman, Peter Gabriel and Wet Wet Wet.  I’m a baby-eating punk skinhead monster, standing in a queue waiting to see one of the best American punk bands ever and what do I get given?  A flyer for two very old prog rockers, a guy who sounds like he hasn’t got any balls and the extremely well named Wet Wet Wet.  If anyone at the Bad Religion gig decided to go to any of those concerts, he or she should be shot for treason.  If would be more appropriate to give out money-off coupons for Bernard Matthews turkey drumsticks at the Vegan Society AGM. To say I was incandescent with fury would be to rather understate the feeling.  However, I somehow managed to control my rage.  Bad Religion was great.  The support band Arcane Roots didn’t really do anything for me musically, but their sound was the nearest I ever want to get to being shot.  Koko probably has the most powerful bass system of any venue for its size in London and they had the kick drum totally maxed out.  Everything in the place just shook.  I’ve never experienced that intensity of bass before, so thumbs up to the band for such an unpleasant experience!  This film has some seriously intense stuff and people being shot in it too.

I always find it difficult to assess what I think of films when they’re based on true events, especially when the events weren’t very long ago; the drama and history remain so interconnected and the effects of the latter so raw and often still evolving, that it’s difficult to be objective.  This is one such example.  This film was originally a three-part BBC miniseries and it’s awesome.  A totally absorbing and sometimes uncomfortable watch, it manages to give a real sense of the chaos, suspicion and differing world views of and in Iraq, during and after the American-led invasion, as it chops back and forward between Iraq and Manchester.  It also manages to effectively explore the effects of this mess on some of the people caught up in it.  It has a number of genuinely powerful scenes, the sort you just think “wow” after.  It looks very authentic, the acting’s excellent and the script very nuanced.  What a shocking nightmare it all was, and still is in many ways too.  As an entertaining drama and as a reflection of what went on, it’s essential viewing.

There is very little music in this film.  It’s there and adds nicely to the scenes when it’s used, but no one’s going to watch this movie for that reason.

No cats or chainsaws.  There may or may not be a decapitation, but I don’t want to spoil what’s one of the most intense scenes in the film, so you’ll just have to watch it to find out.

Recommended for politicians and anyone who has any decision-making role relating to Syria.

Top badass moment?  In a movie full of very flawed heroes, there’re plenty of would-be badass moments.  But being a Brit and this being a drama rather than a documentary, I’ve had to pick out Mike (James Nesbitt) and his mercy dash with the young girl who got blown up by a hand-grenade.  The hospital was a frightening example of what happens when you try to pour a gallon into a pint glass.  James Nesbitt is the Undertones number one celebrity fan too!

I went to see The Wedding Present play in London last night.  There’s not much point me saying anything about its performance, as it’s the 4th best band on the planet.  Instead, here’s what I remember about the gig that doesn’t include the band.  At the end of its set, the guitarist from the first support band, Dead Wolf Club, smashed his guitar on the stage; very rock ‘n’ roll, except I got the distinct feeling he does this a lot and then just glues it back together again for next time.  The other support band, TOQUIWA (formally the Pinky Piglets), was from Japan and therefore made no sense whatsoever; three Japanese women running about on stage singing about wanting a chocolate and doing a lot of things that I haven’t a clue about, confirming my belief that Japan isn’t really from this Earth.  The venue, Koko in Camden, was really cold.  Koko has the worst bar of any venue in London; nothing on draft, with tins of bog-standard cider around £4.50 a can.  Koko has the worst decor of any venue, all gaudy red and gold.  Koko is the worst venue to get out of afterwards; considering its size, it takes forever.  A few years ago Koko used to have crappy sound, but it’s now much improved.  Between each band’s set, the stage lights got pointed towards the crowd, which was really annoying; I shall be seeing yellow spots before my eyes for weeks.  The stage at Koko is too low.  (As you’ve probably gathered, Koko is not my favourite place to see a band.)  As far as I can remember, this was the first time I’d been on the proper Guest List for a gig; I’d like to say I was a ‘friend of the stars’, but in reality I just happened to get my ticket in a slightly obtuse way.  My journey there was swift and easy, as I basically walked onto all three trains without a wait; I think the track in the West Country should get flooded every week, as it seems to improve train availability, despite there being lots of cancellations and delays.  My journey back was also easy; I even had my ticket checked on the train.  The woman sitting in the row of seats in front of me didn’t have a ticket, although there’re a million ways to buy one at Paddington Station, so it was obvious she was trying to get away without paying; she had an American Express credit card too, so I doubt she’s exactly poor; I’d have thrown her out of the train’s airlock into deep space (or whatever the train equivalent is) if I’d been the ticket inspector.  I read the London Evening Standard on the journey back, as there was a copy on the seat.  The Standard is a shit paper, no wonder it’s given away free.  This edition included some dreadful rubbish about young people and claiming housing benefit; if any other group in society was so picked on and vilified, we’d all be out on the street demanding equality and new laws.  Had an interesting chat with two guys in the crowd while waiting for the bands to appear; one later decided my t-shirt’s arm would make a great way to dry the sweat off his head, but I’m sure it was a sign of solidarity; but honestly, what sort of person wears a leather jacket in a most pit?  It’s going to be hot there!  The Wedding Present has very happy fans; the guys behind me in the crowd spent half the set just laughing as everything going on around them.  The band’s fans are mostly men. The gig finished before 10:00pm; a nice, civilised time.  Like the Wedding Present, there’s little point in my trying to give any sort of objective consideration to this film, as it’s just so awesomely amazing.

What can I really say about this movie? Everything about it is great.  It’s probably in my Top Ten films of all time.  This was the first time I’d watched it on Blu-ray and it looked and sounded fab on that.  I was also watching the Ultimate Cut for the first time, which includes a number of extra scenes, even more than the Director’s Cut, including a great dream sequence that features Kyle Reece from the first Terminator movie that was entirely omitted from the version shown in cinemas; and a not quite so great extended ending.  A modern classic and possibly the greatest action movie ever made.

Recommended for everyone.  Well nearly everyone.

No cats, decapitations or chainsaws.  There’s a fair bit of shattering, melting and general ripping apart going on though.

Top badass moment?  “Come with me if you want to live.”  No ifs or buts there.  100% badass and good advice at any time, especially when some liquid metal freak is after you.  Trust me, I know….