The Box / Zombie Invasion (On Bicycles) 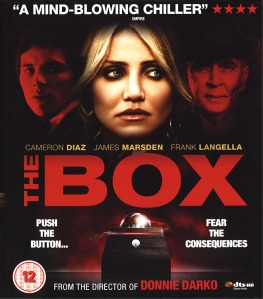 Press the button and get a million dollars, but someone whom you don’t know will die. This is the offer given to Norma and Arthur, an ordinary decent couple played by Cameron Diaz and James Marsden, by the mysterious Arlington Steward (Frank Langella).  The question “What would you do?” will ring in your ears as you witness that their decision is just the beginning. Based on a short story by the writer of “I Am Legend” and from the director of “Donnie Darko”, “The Box” takes you on a tense, gripping and totally unpredictable ride as the couple realise that they are part of something greater and far more terrifying than they could ever have imagined.

Has some sort of universal death wish descended on the world’s cycling population this week?  Or does a bit of snow render all bicycle lights inoperable and telepathically compel cyclists to wear really dark clothing?  The number of people riding bikes in the dark with no lights or anything reflective on, seems to have skyrocketed this week.  They’ve been everywhere, literally jumping out in front of me as I drive along, like zombies, except on bikes, and faster, and not undead with bits of rotting flesh hanging off them, not yet anyway.  I’m really starting to think that I should take a few of them out with my car, get the issue on the front pages and thus in the long run save many more from getting themselves run over.  I know I know, it’s another opportunity for me to become a national hero; and probably locked away by an uncaring judiciary for my troubles too.  Whatever happened to the needs of the many outweighing the needs of the few? I’ll end up a citizens’ champion, losing my liberty for upholding the teachings of Surak, the subject of many an online petition to have my trial or sentence re-examined. This film offers a not dissimilar choice to people, to sacrifice your own freedom for someone you’ll never met.

This intellectual, sci-fi thriller is a brave attempt to do something a little different; it partly succeeds and the first part is excellent, but in the end it sort of looses the plot a bit, literally.  The idea is great, it looks good and it’s fun enough to watch, but it sort of gets a bit too complicated whilst at the same time being a bit too simplistic and leaving too much open to interpretation.   If you have to listen to the commentary to find out what was going on, then it’s kind of failed.  A second watch would probably be more rewarding, which isn’t such a bad thing.  I also didn’t really warm to the main characters Norma and Arthur.  They had plenty of money, a nice house, son and lifestyle, yet had over-extended themselves financially a little.  However, they didn’t seem to be in any particular difficulty but still choose to press the button.  An “ordinary decent couple” it says in the overview.  They just condemned someone to death.  Geez, I’d hate to meet an ordinary couple that wasn’t decent then.  After that, they did lose what little sympathy I had for their ‘plight’.  The end should have been pretty heart-rending, but I just found myself thinking that the situation they found themselves in served them right.  Maybe that makes me a bad person, but I really don’t think I’d have pushed the button.  The best scenes are the ones with Employee Arlington Stewart in them; an excellent bit of acting and a wonderfully rendered character.  The music is pretty good too.

Recommended for people willing to concentrate.