Hedwig and the Angry Inch: 4.0 Stars 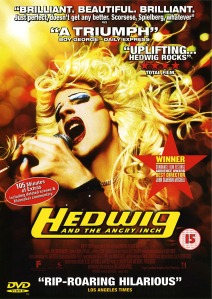 Today I’m thinking a lot about bananas, “Britain’s favourite fruit”.  Admit it, when was the last time you ate a really nice tasting banana?  I bet it’s a long time ago, if ever.  Is it any wonder that banana favoured things don’t really taste like bananas at all, because if they did, no one would buy them. Other than they’re conveniently packaged and you can made rude jokes about them, what have bananas really got going for themselves?  Most of them are supplied by just five companies and only 4% of the sale cost of them makes its way back to the growers.  The whole bent banana system is abused and controlled by the large supermarkets too.  Basically you’d be much better off buying yummy oranges and their smaller, delicious relatives.  Oranges even have a colour named after them, that’s cool; bananas are just, yellow.  Bananas, at best, should be squished up and hidden away inside smoothies; oranges deserve pride of place as the centrepiece of any meal.  Not only that, but every time you eat an orange a small child somewhere smiles.  Bananas just make people slip over and break legs and things.  What an underhanded and mean fruit the banana is.  Bananas hang about in big gangs (which they euphemistically call ‘bunches’) too, waiting to pick on little strawberries and raspberries and things.  What a cowardly fruit.  I haven’t checked this, but I’d image that more ASBOs have been issued to bananas than any other fruit; and I’m pretty sure the prison fruit population reflects this too.  And don’t you just hate it when you peel a banana and the inside has either turned into a disgusting slime reminiscent of an oil slick, or its split and half of it falls to the floor as soon as you open it up?  No one is going to tell me that something that turns into a vile, black goo that wouldn’t look out-of-place oozing from a zombie’s eye socket, is going to be good for you.  This film is about someone who’s suffered from a botched, sex change operation.  (See, I said that’s all bananas are good for.)

When this film first started I thought, oh God, this is going to be one of those ‘musicals’ that makes no sense and has awful American Adult Oriented Rock all the way through it.  The sort of music that ineffective, male, middle-age managers in large corporations who like to pretend they’re 18 when no one is looking, think is kiss-ass rebel music that still has some relevance these days; it’s not and it doesn’t.  (Yeh, go get on your Harley-Davidson’s gents; oh, you don’t actually have any?  How surprising!)  The first song in the movie seemed to confirm this.  But then a really weird thing happened.  It turned into a very good film with okay music (and two genuinely great songs), a decent plot and great (if a bit over the top) characters who are worth you caring about.  The music performances are top stuff, very genuine.  Follow Hedwig and her band as they tour local eateries, shadowing her ex, Tommy Gnosis (the G is silent), who stole all her songs and is now a big star.  Listen to her sing about the aforementioned operation, the fall of the Berlin Wall and how fucked-up her life is.  A black comedy-drama with a genuinely touching ending.  Good stuff, go watch.

Recommended for fans of American proto-punk; and films about outsiders fighting back and discovering who you really are.