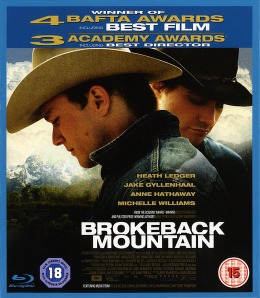 From Academy Award-winning filmmaker Ang Lee comes an epic American love story, “Brokeback Mountain”. Set against the sweeping vistas of Wyoming and Texas, the film tells the story of two young men – a ranch-hand and a rodeo cowboy – who meet in the summer of 1963, and unexpectedly forge a lifelong connection, one whose complications, joys, and tragedies provide a testament to the endurance and power of love.

I had a very disappointing day today.  I went to a meeting in a place called Lymington.  It’s about as far south-west as I can go and still remain in ‘my patch’ at work.  If I’d gone much furthered I’d have entered the “South West” and risked immediate kidnap, assassination, or worse, from my colleagues in that part of the country.  Although we’re officially “One Team” these days, at a local level there’re still some patches of tribalism, although it’s nothing that a forty-foot high electric fence topped with razor wire wouldn’t cure.  Anyway, Lymington is on the edge of the New Forest National Park.  But what a swizz it all is!  I drove right across it and all I saw were loads and loads of old trees, some of which actually looked dead and had ‘things’ like birds, bats and bugs living in them.  There were hardly any young ones at all.  How ‘they’ get away with such a bare-faced lie I’ve no idea; surely there must be some sort of advertising standards law they’re breaking?  It’s a terrible reflection on us all that these days unless something’s labelled new or improved, no one’s interested in it; indeed, I seem to suffer from this problem myself.  Washing powder and smartphone manufactures have a lot to answer for.  “A mosaic of ancient and ornamental woodland, open heather-covered heaths, rivers and valley mires, a coastline of mudflats and salt-marshes and pretty, historic villages; the largest area of lowland heath left in southern England.”  Who’s going to be interested in that when they could go and play Laser Quest and then get pissed in the pub afterwards?  Like the New Forest, this film also grossly misrepresents itself, as it fails to provide any sort of back injury whatsoever, not even a pulled muscle.

I’m not a big fan of westerns.  I also imagine Hell to have a soundtrack that features country music on heavy rotation.  Characters engaged in herding animals about and shooting others, have to work hard to overcome their inherent, non-vegan nature and don’t tend to attract my sympathy either.  It’s been a while since I was a cowboy too, so I’m probably a bit out of touch with what’s hot and what’s not in lasso-land; in fact the last time it happened I was very young and had been given a cowboy outfit for my birthday; I didn’t even know which way around to hold the gun and consequently went about shooting myself rather than the hordes of evil Indians that I imagined were busy invading our flat in central London.  I guess what I’m trying to say is that this film was not one that on the surface I was likely to enjoy and up until now, unlike every other human being on the planet, I’d never watched it.  Fortunately, I quickly realised what it’s really about and it suddenly made a lot more sense to me.  “Brokeback Mountain” is basically a reimagining of a number of Thomas Hardy’s novels, where the dictates of society prevent two people from being together.  “People go on marrying because they can’t resist natural forces, although many of them may know perfectly well that they are possibly buying a month’s pleasure with a life’s discomfort.”  (Jude the Obscure).  It’s a film that, like many Hardy novels, involves a lot of rural landscapes, shepherds, folk music and drinking in bars.  I was just waiting for all the sheep to find a cliff somewhere to throw themselves over.  Like Hardy, “Brokeback Mountain” demonstrates the futility of life and the inevitability of being disappointed, let down and kept apart from those you hold most dear.  At the very least, the credits should have said something to the effect that it was inspired by the poems and novels of Thomas Hardy.  “Brokeback Mountain” is a bleak  and touching film, with the last half hour providing a powerful bit of cinema.  The admission that your feelings for someone have effectively fucked up everyones’ lives; priceless wisdom.  This is also a lovely looking film (and I’m not just talking about Michelle Williams, who looks very cute in it), with lots of great views of the countryside.

Country and western music, noooooooooooo..!!!  I’m just a woman and my man beats me up and shot my dog for fun and had an affair with my sister and hates me but he’s still my man so I’ve got to love him….  The rest of the soundtrack isn’t bad and it does have ‘that’ bit of music, “The Wings” by Gustavo Santaolalla.

Recommended for fans of good movie making.  Not recommended for anyone that thinks gay people are an abomination or mentally ill; for you I recommend you go fuck yourselves instead, which if you’re a guy is actually a pretty gay thing to do when you think about it; but you probably won’t want to think about it.

Top badass moment?  It takes him long enough, but Jack finally giving Lureen’s father the bollocking he deserves.  I despise people like that who’re so full of themselves; what a bullying, arrogant prick he was.