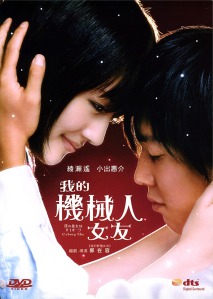 Jiro (Keisuke Koide) meets a mystery girl (Haruka Ayase) on his birthday!  One year later, they meet again.  It is a shock to Jiro as she confesses and turns out to be a cyborg from the future that Jiro has sent to him as a present!  Getting along with this mischievous cyborg girl friend, Jiro falls in love but she has no feelings at all.  All of a sudden a disastrous earthquake his Tokyo, the cyborg saves Jiro’s life by sacrificing herself and the ultimate mystery of cyborg is going to be revealed.

Because I’m a fairly stupid person I sometimes buy DVDs or BDs (Blu-ray discs) that I’ve already got a copy of.  I also occasionally upgrade from a DVD copy of a film or TV series to a BD one, or buy an alternative version because it’s longer or uncut.  This means I gradually accumulate a supply of discs I no longer want.  I used to sell these on eBay, but mostly I can’t be bothered to anymore so just get rid of them via MusicMagpie instead.  The latter doesn’t pay a lot, but it’s quick and easy to dispose of them this way.  Sadly, its home collection service is, (from my first attempt to use the latter), entirely shit.  I waited about at home from 8:00am to 8:00pm on the relevant day for someone to come and collect my parcel, but no one came.  It’s not like I live in an invisible castle floating in the sky, stuck in a parallel reality and out of phase with the regular universe, protected by a high (electrified) fence, a pack of hungry attack dogs and a set of visitor traps that even Indiana Jones would think twice about tackling; I live in a flat with a clearly marked buzzer on the outside wall by the door.  And in a rare bit of good, British urban design, there’s always space outside to park too, without fear of getting a ticket or being clamped.  I e-mailed the company a couple of days ago to find out what the problem was, but I’ve yet to get a reply.

Despite it’s time-travelling, disaster, sci-fi, slapstick, action-movie clothing, this is really a romantic comedy, the sort where nothing else really has any real world consequences outside of the two main characters.  Get caught in the middle of a restaurant shooting?  Big Deal.  Doing your Terminator ‘thing’ in the middle of a busy road junction?  So what?  Your capital city gets destroyed?  Whatever.  It’s another one of those movies that only Japan seems to be able to produce, where this eclectic mixture of genres not only works together but feels entirely normal.  In a damming indictment of our screwed up, star gossip culture, our hero, the nice but exceedingly dull and boring student Jiro, has become a bit of a celebrity in the future.  This is enough for someone to want to travel back in time and meet him.  Or something like that anyway.  The special effects are decent enough and the story is fun in its own way, but it’s a film that gets its kicks from frequently and suddenly changing its mood.  The scene where they travel to Jiro’s home village is really rather touching.  It also has a dance-off scene that’s pretty cool too.  The ending is a bit of muddle, as if the writers were suddenly struggling with how to sort out all the loose ends, but it’s a fab and fun mash-up of a movie, full of little Terminator references and well worth watching.  Haruka Ayase is very cute too; not at all like Arnold Schwarzenegger.

The soundtrack varies from forgettable to okay, with the use of some pop songs filling in the gaps.  J-pop is an interesting beast…

The trailer isn’t bad, although it does underplay the ever-changing mood of the film.  The use of some questionable music over the action probably doesn’t help; then again, maybe it’s very appropriate given the ‘atmospheric turbulence’ of the movie.  For some reason, YouTube has cut the second line off the subtitles; it probably doesn’t make a lot of difference though.

Recommended for dull students, both geeks and nerds, cyborgs (and other artificial life forms) and teachers who like to throw bits of chalk about.  (Does that still happen these days or is chalk now classed as an offensive weapon?)

1 cat, no chainsaws or decapitations.  A body does get severed in two though.

Top badass moment?  I’m not sure someone/something that’s programmed to be what’s basically badass can actually then do anything that should count here, which leaves us with wusey Jiro.  Sadly the latter fails to do anything remotely badass for the entire movie, which leaves me with a bit of a constitutional crisis.  I’ll need to consult a solicitor before I’m prepared to comment further.  Raoul, Jiro’s pet cat (not the lizard), puts in a couple of excellent performances; his eating from the dish was especially nuanced and controlled.