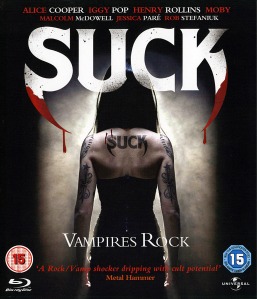 The greatest rock ‘n’ roll vampire comedy ever made, “Suck” stars rock royalty Alice Cooper, Iggy Pop and Henry Rollins, and brilliant performances from Moby and British screen legend Malcolm McDowell (“A Clockwork Orange”).   The Winners are a struggling band desperate to make it to the top and strike a record deal.  After another mediocre gig, Jennifer (Jessica Paré “Hot Tub Time Machine”) the sexy female bassist, disappears with a young vampire and returns the next morning sprouting fangs and a taste for blood.  One by one each member succumbs to the dark side and leaving a trail of lifeless groupies in their wake, they soon reach the heights of success that they could only dream of as mere mortals.

Yesterday I walked to work at my new office for the first time.  No longer do I need to trek thousands of miles (well it felt like thousands) each day, face death as I cross the busy A4, deal with selfish pavement hogs along the Oxford Road, heroically climb ‘The Mountain’ or risk loss of sensory deprivation as I bisect the country-sized Tesco car park.  My journey now takes about 15 minutes and I don’t need to set up a series of resupply depots and emergency evac protocols to enable me to take the trip.  A number of other differences were apparent too.  For a start, I had to battle my way through two (yes two) school runs, as I passed two primary schools.  A pavement jam-packed with slow-moving mothers, toddlers in pushchairs and chaotic, hyper-active youngsters, who randomly change direction with no respect for The Rules.  I’m an experienced Pavement Warrior, but this was something else.  It’s only going to be a matter of time before I accidentally mow one of these tiny terrors down and end up in jail forever as a child killer.  Then there were the others, a mixture of students going to the Tesco Metro (I didn’t realise any got up that early) and men and women in business suits, power-walking into the centre of Reading.  On my previous journey, I’d count myself unlucky to be overtaken by even one person, but yesterday it happened twice, as I was left choking on the burning rubber left behind by the soles of two pairs of fast-moving, expensive shoes, worn by who I can only assume are relatives of Usain Bolt.  Unless I’m carrying a heavy bag, being overtaken by someone is a direct challenge to my sexuality, questions my prowess in bed and lessens my status as an Alpha Male.  Clearly more of a sprint than the marathon I’m used to, I’ll not be caught out next time.  Game on…  This film is about a group of people who make a change to how they do their job.

Sadly, this movie wasn’t so bad that I’m able to say it sucks.  Nether was it some sort of  unimaginatively named 70’s porn.  It’s actually quite a lot of fun and does feature a number of real rock stars amongst its cast.  (By the way, who originally came up with the expression “rock royalty”?  It’s an unspeakably dreadful term.)  The cast put in generally spirited performances and the whole thing is really quite endearing.  It’s got Malcolm McDowell in it as well, as vampire hunter Eddie Van Helsing; and let’s not forget that this is the guy who killed Captain Kirk!  That’s real ultra violence.  And while we’re on the Star Trek theme, it’s also got Ezri Dax in it.  Moby (who’s vegan and thus awesome), plays a character called Beef Bellows, lead singer of rock band The Secretaries of Steak.  See, even vegans have a sense of irony.  Jessica Paré, who plays bassist Jennifer, was a bit disappointing.  I’m not quite sure why, but she didn’t quite pull off the vampire diva ‘thing’ that was meant to propel the band to stardom.  Much more of a comedy than a horror, this movie’s a good excuse to while away 91 minutes of your life.

A film about a band needs to have good music, but unfortunately this one suffered a similar fate to so many others and features a lot of mediocre, bland, forgettable, indie rock.  It’s a film about a band of vampires, but the music’s about as gothic as One Direction.  The performances are pretty good though.

Recommended for rock stars, would-be rock stars and vampires (and the undead in general).

Sean Veil (Lee Evans) is an ultra-paranoid murder suspect who films himself around the clock to provide an alibi, in case he’s ever accused of another crime.  When the police come calling to investigate a new murder, the one tape that can prove his innocence has mysteriously disappeared.  Past and present collide as Sean strives to prove his innocence of this and all the other crimes that have been laid at his door.  But the accusations and the tension mount and just when Sean thinks it’s all over, an unexpected twist finds him fighting for his life…

A couple of months ago I started walking into work again, rather than driving.  Regularly walking the 2.4 miles each way has turned me into a hyper-fit super-being, but it’s not without its drawbacks.  Today I’d like to briefly consider the concept of Pavement Wars.  My journey includes a significant section along the Oxford Road in west Reading, where I find myself walking ‘against the tide’, as most people are going in the other direction and into town.  I’m used to the barbaric anarchy of rush-hour on the Tube, where a fallen body is considered nothing more than an annoying trip hazard; but I thought out on the open road (well pavement) of the Home Counties, things would be a little different.  I thought people would lift their hats in polite greetings as they passed one another, whilst exchanging a few words of small talk, about the weather or cricket scores perhaps?  Sadly it’s more like a pedestrianised version of Carmageddon, with the sort of manoeuvring that would lose a driver his or her license in a moment.  Seriously, it’s like a war zone out there and I’m not winning.  I’ve lost count of the number of time I’ve been forced into walls, bollards and the road, in an effort not to get mowed down by others’ irresponsible walking.  But this guy is fighting back!  Last Thursday, my path was blocked by two women coming in the other direction.  Any decent human being, when walking next to a friend, would make sure they got out of the way if someone was coming in the opposite direction and the two of them were totally occupying the path.  But not these two.  And they both saw me coming along, I’m quite sure of that.  Did they expect me to step out into the road to let them pass, even though I had my back to the traffic?  Was I the innocent victim of bitchy office politics, which meant nether of them wanted to walk behind the other, in case this more submissive stance might have some bearing on an inter-departmental power-struggle?  Perhaps my “Do You Like Waffles?” t-shirt wasn’t scary enough?  Or were they just inconsiderate, stupid, thoughtless, brain-dead bimbos?  Who knows?  Whatever, this time there was going to be no hanging about waiting between the bollards for them to pass.  I braced myself for the inevitable impact, which happened just about here.  As we passed my arm briefly collided with the tall blonde’s.  I suppose with hindsight it was probably the most exciting sexual caress she’s had for ages, but to me it meant only one thing; at last, I was a true Pavement Warrior!  No longer will I cower in shop entrances, between bollards, behind bins or pavement furniture.  Reading take note; there’s a new kid on the block, a new kid who’s no longer gonna be pushed around by people who think the sidewalk owes them a living.  I’m ready for war.  Are they?  Given all that, it’s a shame I’m not about to consider a viewing of “Mad Max”.

In a thriller with more twists than a shop full of Curly Wurly bars (or an avenue of Corkscrew Willow if you prefer), comedian Lee Evans convincingly portrays a paranoid and socially inept guy (Sean) who films his every waking (and sleeping) moment.  Fortunately, we’re spared most of the more ‘intimate’ moments of his life, but  it does make for an original and interesting, although somewhat convoluted movie.  I’m a bit stupid so I’m pretty sure I didn’t manage to follow everything, but it was still a really good watch; (despite the overuse of blue filters and a tiny, non-anamorphic 2.35:1 picture).  So this probably means it’ll be a good watch next time too, as I still won’t know what’s going on; being an idiot does have its advantages.  I did feel sorry for Sean; putting up with dodgy TV reporters, useless and greedy psychologists, a whole population that thought he was a triple murderer and cops that ‘cross the line’, is enough to send anyone a bit round the bend.  The amount of plot twists in the last ten minutes are likely to send most viewers a bit round the bend too.  His ‘underground house’ was interesting though.

The soundtrack is exactly that.  There’re no dumb pop records put into the film to enable some sort of “as featured in” soundtrack to be released.  It’s just decent music added into scenes to make them better in that way that only music can.

Recommended for police detectives, the paranoid, the tabloid press, everyone who hates CCTV and any innocents who’ve ever been accused of murder.

No cats, chainsaws or decapitation.

Top badass moment?  In a film full of twists and turns, the fact that Sean managed to keep himself together enough to do what he needed to do, qualifies as badass.