On the Doll / My Gambling Addiction 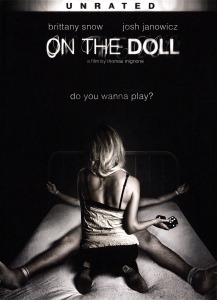 Sex. Violence. Revenge. “On The Doll” is a dark look into the lives of sex workers and the affect it has had on their lives. Balery (Brittany Snow) is a call girl desperate for cash who conspires with Jaron (Josh Janowicz) to rob one of her regulars. Chantal (Shanna Collins) wants out of her door to door exploits to start life over with her boyfriend and Tara (Angela Sarafyan) has been pulled so far into her seedy peep show underworld that it could be too late. Mr. Garrett (Eddie Jemison), is a high school teacher who looks to bring some of his students (Candice Accola & Chloe Domont) into his world of sex and drugs. And behind it all is Jimmy Sours (Paul Ben-Victor), a twisted mastermind of the sex trade who controls the fate of everyone mixed up in his world. A cast of young, up and coming actors takes you to a place where victims search for new meaning in their lives, while fighting off the demons that lead to more pain. The first feature by acclaimed music video director Thomas Mignone, “On The Doll” is a shocking, but powerful look into a world that is sure to strike a chord.

As everyone knows, I’m a hard rockin’, hard drinkin’, womanisin’ Lothario.  Recently I’ve added to my vices by also becoming a hardened gambler too.  How did this happen?  Well a few days ago I found myself standing in the queue at Tesco.  I refuse to use those nasty, automated, DIY checkout machines.  I want to be served by a human being.  I value the social intercourse I get with the frequently bored people I meet in this way; it helps give me a better prospective on my own life.  The choice as to whether or not to take advantage of the plastic bag I’m always offered keeps my mind sharp and helps me hone my decision-making abilities for the more ‘mission-critical’ circumstances to come, such as when to cross the road outside in a way that enables me to beat the traffic at the lights, before I’m turned into road-kill.  I distrust those self-service machines.   This is partly because all they’re good for is to do people out of jobs to boost shareholders’ profits.  I’m not letting them crush our will and independence comrades.  They also seem to have, en masse, taken a very personal dislike to me and enjoy nothing better than screaming out really loudly whenever I go near one that there’s an “unexpected item in the bagging area”.  Yes, me.  This phrase basically means the same as, “ha-ha everyone, let’s all draw attention to the stupid, luddite, fuckwit, who can’t operate us ‘idiot-proof’ machines properly and is now going to have to deal with the very public humiliation of being ‘helped’ by a smirking and bad-tempered shop assistant.  Seriously, it would be less embarrassing to stand in the middle of the High Street in Reading on a Saturday afternoon, dressed as a ballerina and announce to everyone there that I have the world’s lowest recorded sperm count. (Which of course, I don’t).  Anyway, back to my gambling addiction.  The person in front of me bought a Lottery Scratch Card.  I’ve never ever bought one of these.  I’ve always considered that they’re basically designed to entrap ‘weak-minded poor people’ into a downward spiral of debt and despair.  These people can then of course seek help to overcome their addiction, by attending a community-run self-help group, funded by the very same Lottery that caused their problem in the first place.  I don’t know what came over me, but when I got to the checkout I purchased three, £2 Scratch Cards.  And blimey, I only went and won £10 with one of them!  I must be so clever and skilful.   Trouble is, now this has happened it’s going to be a lot harder to ignore these things in future.  I feel my life now stands at a crossroads.  In one direction is a steep descent into a pit of unrelenting gambling debts, depression and finally suicide.  In the other is my present path, a steep decent towards a pit of unrelenting aging, depression and finally death.  I think I need to hone my decision-making abilities more.  This movie focuses on one vice that I don’t seem to have picked up yet, although I live in hope.

For a film about sex workers, this one’s surprisingly lacking in nudity; actually there isn’t any at all.  In fact it’s quite stylish, given its setting.  I find I don’t have a great deal to do with the sex industry on a regular basis myself, (but I guess that’s a good topic for a future blog entry), but if I did I can’t help thinking it would all seem a lot more seedy this this movie makes it out to be, although it does have its moments.  I guess they all just seemed a bit too clean, healthy and happy, even the sick, sad ones.  This ‘small detail’ aside, it’s actually quite a decent film, occasionally funny, occasionally painful.  (The latter will make sense if you watch it.)  The ending is a bit melodramatic but it kinda works.  I’m not sure if you’re really supposed to enjoy movies like this but I did.

There’s a fair bit of music used in this film.  Most of it is fairly anonymous, modern indie rock, but it gets the job done.

It’s not a bad trailer.  Quite watchable as its own, little ‘mini-film’ that doesn’t give too much of the plot away.

Top badass moment?  So few people really seem to make an effort to do their best at work, so it was great to see our anti-hero Jaron taking special care that the ads for prostitutes he was doing the layout and design for, were both spelt correctly and made sense logically.  Taking a pride in your work is badass, especially when it’s basically a crappy job to start with.

Having thought that this film was going to be about life at a builders’ merchants, or perhaps focused on a particularly fast style of dance or punk music, I was astonished to discover it was none of these things.  I really should read the stuff on the sleeve before watching a DVD; I was so looking forward to finding out more about the life of a delivery driver too, as he goes through his list of jobs, dropping off bricks, cement, plaster, wood and other materials essential to the construction of the buildings and other features we’ve all come to rely on these days.  Anyway, let’s see what I can remember about it.  Guns?  Check.  Drugs?  Check.  Beautiful lesbians?  Check.  Prostitution ring?  Check?  Some naked people (both genders)?  Check.  Seedy businessmen (and businesswomen)?  Check.  Roman soldier’s helmet on fire?  Check.  Pimp that uses colour-coded Post-It Notes to organise everything?  Check.  A drug dealer who only speaks in astrological predictions?  Check.  Bizarre fantasy sequence involving the main characters doing their own version of part of the opening credits sequence from “Beverly Hills 90210”?  Check.  Really awful version of Abba’s “Dancing Queen”?  Check.  It’s all in Greek?  Check.  Okay, I think I can remember some of it.  By the way, if anyone is interested, the Post-It Note sequence appears to go yellow-blue-orange-purple, with yellow being used for low-paying customers requiring a ‘basic’ service and purple for higher-class events.

I suspect this film is a lot better than I’m going to credit it for being.  The trouble is, I think I fell asleep a few times whilst I was watching it; either that or it’s got really, really bad editing.  I have to admit that I’m having some difficulty working out what to say about this movie.  It’s basically a ‘get our own back on society and people in general’ type of film, which follows the lives of two young women.  It sort of falls into two parts.  The first covers the time they spend as prostitutes and the second the period when one of them is following a successful modelling and acting career.  There’s a murder trial in the middle somewhere too.  It does have some black comedy in it but the overall feel is one of it being a somewhat seedy drama.

Recommended for people who like films with a grubby storyline; along with those that like Quentin Tarantino-ish movies.  It probably helps if you can understand Greek too.

Top badass moment?  I use a lot of Post-It Notes at work.  In fact I probably use far too many and use them when I could just scribble stuff on a bit of scrap paper.  I wouldn’t say I was addicted to them, like I don’t go home every night and stick them all over my naked body, but I would miss them if they vanished.  So not surprisingly, the boss of the prostitution ring featured in this film, purely for his over-use of Post-It Notes to organise and categorise work for his ‘team’, is badass.