This is England / Dreadzone 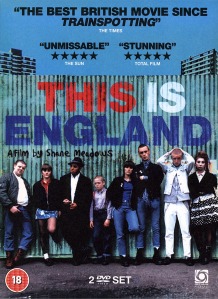 “This is England” tells the story of Shaun (Thomas Turgoose), an 11 year old kid growing up in the North of England. Set during the summer holidays of 1983, it follows his journey from a shaggy haired ruffian grieving the loss of his father into a shaven headed thug whose anger and pain are embraced by the local skinhead fraternity.  Largely based on Meadows’ own personal experience, “This is England” not only captures a specific point in British history, but also beautifully articulates the allure of being part of a gang.  Brilliantly charting a course from the joyous early passages to darker territory, Meadows also skilfully and with great sensitivity deals with the complexities of rage, race and masculinity.  Featuring astounding performances from Stephen Graham, (“Gangs of New York”) and newcomer Thomas Turgoose, “This is England” is a riveting and deeply moving portrait of an often-overlooked moment in cultural history and is arguably Meadows’ masterpiece.

Went to see Dreadzone two nights ago. It was playing Sub89 in Reading, which is great because it’s a 20 minute walk from where I live in Cactus World.  There was a massive queue outside when I got there.  In fact it was so long that as I was walking alongside it, I started to doubt whether it was actually the queue at all; and the people in it mostly didn’t look like the sort who would go to a Dreadzone gig either.  In the end I took a walk around the block so I could reconsider the problem after having a bit of a think.  (I have a real phobia of new gig venues, although I’ve actually been to Sub89 quite a few times.)  However, after a little bit of loitering by the bus stops opposite, I decided that for some reason the doors that aren’t normally used for gig entrances were actually being used in this case.  It appeared they’d put the gig in the downstairs bar and the nightclub upstairs where gigs normally take place.  It’s a damming indictment of England and further proof that as a national were totally fucked, when the queue for a nightclub to dance to ‘chart music’ is about 1,000 times longer than the one for a quality band like Dreadzone.  The young of today have been brainwashed into accepting mediocrity as the norm and not wanting to rock the boat, because they’ve got no job or a massive student debt to pay off (or both) and need to save up for their pension, mortgage and overpriced wedding.  Fortunately, a few are still alive and they’d managed to make their way into the gig, along with a few survivors of times gone past.   The gig was in the Bowery District, which is basically a posh cocktail bar.  Having said that, it did have a proper little stage, some reasonable cider and a decent sound system.  (Then again, most systems sound okay if you hang around about a metre away from a speaker stack all night…)  What was also interesting about it is that if you stand near the stage, the design of the space effectively makes you feel you’re in a much smaller place and does a nice job of making things feel very intimate.  So actually it wasn’t bad at all.  Dreadzone played for what seemed like a long time.  There were no support acts; something that doesn’t happen very often.  It’s not a band I have a lot of recorded material by, but it’s one of those bands I’ll always try and go and see live, as that’s where it works best.  I was pretty tired by the end.  Dreadzone has quite a complex mix of beats and they certainly tax my abilities to the limit.  (Then again, a click track would do that too.)  The top of my legs are still somewhat sore today; which is odd, as it’s normally my calves that get knackered.  Fortunately it finished at 22:00, so I was home by half ten.  Dreadzone  –  Gangster  Dreadzone  –  Too Late  Dreadzone  –  Beyond a Rock  This is a film that features lots of music too.

Except for a period in the 80’s, I’ve always kept my hair pretty short. These days I shave it myself (a “Number 1” for the technically minded), because I’m too mean to pay someone else £10 to have it done each time.  I’ve been doing this for several years, so I imagine the part at the back that I can’t see probably looks a total mess now.  For years, I also used to wear a pair of DM boots too, (before I became vegan in about 1989).  Despite this, I’ve never really been a skinhead.  But it really, really pisses me off to see morons appropriate my flag and some of the musical styles I like for their racist shit.  These people have as much in common with the roots of the culture as IS has with the teachings of Islam (i.e. nothing), but as a result have tarnished a whole way of life.  This is a film that well illustrates the best and the worst of the skinhead culture in the early 80s.  It’s a brilliant movie on just about every level and a film everyone should see, if only to give themselves a history lesson.

As a film based on skinhead culture, it ought to have some great music in it and it doesn’t do too badly, although it would have been good to have a bit more. We get a good mix of reggae and 2 Tone ska, plus (rather more inexplicably), “Warhead” by the UK Subs.

In common with the film, its trailer is a top one too.  It’s exciting and intriguing, but doesn’t give the details of the plot away.

Recommended for skinheads, and anyone who’d thinking of putting a young character into a film and wants to see how to do it without making everyone groan.

Top badass moment? Woody and his gang of skinheads befriend an 11-year-old boy who’s being bullied at school.  They get him some proper clothes, a decent haircut and expose him to some quality reggae.  That’s badass.  What a shame it all gets spoilt by a racist idiot.

Today feels like a Sunday.  It’s actually Monday but it feels like a Sunday because I worked on Saturday.  Tomorrow is Tuesday, but I’ve no idea if it will feel like a Tuesday or more like a Monday.  This film is similarly themed around confusion, except that it’s about a Jew who’s a Neo-Nazi.  Okay, I’ve got a bit of a confession to make now.  I’ve personally harboured a secret expectation for years that I might be a real Jedi Knight, who one day will be called upon to save the human race from some horrible fate.  (I do actually do something very similar to this every day of life as part of my job, but somehow it’s not quite the same thing.)  Sadly, up to now my attempts to influence people with my mind have been a singular failure; in fact I can’t even influence my own thoughts.  I also can’t fight with a light sabre very well.  If anyone remembers Star Wars Kid from a few years ago, you will probably be able to visualise just how well I can’t wield this awesome weapon; if I had one, which I don’t, obviously.  I do however, enjoy waving a torch about when in a dark place as if it’s a light sabre, making ‘that’ light sabre sound.  In fact I suspect I do this nearly every time I have a torch in my hand, probably not to anyone’s amusement except my own.  I suppose I’m lucky that most people in Cactus World are pretty tolerant when it comes to care in the community.

This is a great film. Ryan Gosling makes a first class job of playing Danny, the main character in it, an anti-Semitic skinhead who’s actually Jewish.  It’s all pretty engrossing stuff and the ending is far from clear until you reach that point.  Despite his entirely repellent and ridiculous views (especially regarding Jewish people), the film does a good job of making Danny quite a sympathetic character at times.  It’s often the sign of good writing and acting when an unpleasant character can still make you feel sorry for them.  If the movie has a weakness, it’s probably that Danny seems educated and highly intelligent, yet his actions demonstrate quite a mixed up and confused outlook on life.  It would have been good to have got inside his mind a bit more to find out what was going on in there.  The film’s pivotal scene, where Danny and his gang get sent to ‘tolerance classes’ after a fight in a cafe, is genuinely powerful and heartbreaking stuff, from the point of view of both the stories that get told and the reactions to them.  This movie also has Summer Phoenix in it, who as well as being a very beautiful woman also happens to be a lifelong vegan.  Then again, all vegans are beautiful/handsome, clever, empathic, compassionate, determined, (please insert your 50 favourite human attributes here), etc.  Except me, which is a bit annoying actually.  And finally, I’d just like to remind people of the link between early reggae and skinheads.  Being a skinhead doesn’t make you a raciest, although being a moronic asshole who frequently spouts uninformed and ill-conceived, generalised crap about other cultures, often does; so really, they should be easy enough to tell apart.  Don’t fall into the trap of getting them confused and assuming they’re all the same, or you might just find you’ve become one yourself.

Recommended for people who like good films and topless vegans.  (If anyone wants to see me topless I come pretty cheap!)

Top badass moment?  Danny in the scene near the end when he’s speaking to all the people at the fundraising meeting.  Doing the unexpected with style and pissing just about every one off in the process is pretty badass.

The Believer on IMDB