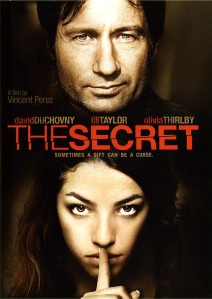 What if you got one more chance to say goodbye to your loved ones after you died? But what if the only way to do that was to inhabit your daughter’s body?  David Duchovny (“The X-Files” and “Californication”) and Lili Taylor (“The Haunting” and “Ransom”) are Benjamin and Hannah, happily married soul mates whose relationship is brutally severed when Hannah is killed in a car accident.  As she dies, a bizarre twist of fate propels Hannah inside the body of her beautiful teenage daughter, Sam (Olivia Thirlby, “Juno” and “United 93”).  Immersing herself in Sam’s world, Hannah discovers some shocking truths about her daughter’s secret life, while at home, she and her husband draw closer and closer to rekindling their romance….

I spoke to two people yesterday, on the phone, for quite a long time.  This made me realise that I can’t actually speak properly anymore or string a sentence together at ‘speaking speed’.  I’ve not really had a proper conversation with anyone for weeks; well since before Christmas anyway.  I’ve had plenty of ‘shop chats’ (where you just say “thanks” or “cheers”),  a few other short ones on the phone, plus some on the Tube and in venues where it’s really noisy so you have to shout, but no ‘normal’ ones.  I forgot how to have a normal conversation years ago, but now I can’t even make up sentences up that work grammatically or make sense.  I imagine this might make me even more of a social outcast than I already am, another embarrassing faux pas I can add to a growing list.   Then again, it doesn’t seem to have stopped Professor Stephen Hawking being a genius, although I probably don’t have his insight into ‘how things work’.  I can’t see myself being asked to advertise an insurance comparison website anytime soon; or writing a book on how the universe came into being either.  This film features someone who suddenly finds himself unable to communicate with his wife in the way he’s been used to doing.

This is a decent fantasy thriller.  It’s based on a Japanese one called “Himitsu” that I watched years ago.  (I don’t suppose the fact I watched the latter influenced the decision to make this film.)  It would be quite interesting to Go Compare them side by side, (which for those that haven’t made the connection, relates to the “insurance comparison website” I mentioned earlier).  There’re a number of ‘body swap’ movies out there, but most of them are comedies; this one isn’t.  This could have been a great film, but somehow it just doesn’t quite make it.  The script pulls its punches a bit when it could have really landed a few know-out blows.  The characters don’t quite feel coherent enough to be totally believable; there were too many gaps in time between some scenes, which changed their relationship without us really seeing or knowing why.  This is a shame, as this really is the core of the whole film and at times is really played out well.  It could have explored the difficulties of the situation a lot more too, which would be helpful to anyone who ever found themselves in the same one for real; (okay, so not very likely I admit).  Some of the minor characters seem a bit caricaturish too; I was half expecting them all to go off to a remote location somewhere and get killed by a nutter with a big knife.  Olivia Thirlby’s acting as the daughter/mother is great though.  In a few scenes she switches between them and it’s really spookily convincing.  The car crash one works well too, as does the one in the hospital, very realistic and effective.  So, it underachieves a bit, but at its best it’s more than worth a watch.  As for the rating details, they sound like they could be applied to life in general.

Recommended for people who want to debate the “would if have been incest or not” issue; which doesn’t include me as apparently I can’t speak anymore.

No cats, no chainsaws or decapitations.

Top badass moment?  It’s not every day you have to deal with your dead wife being sort of reincarnated inside your daughter’s body.  That has to make things really complicated, not that it’s something I’ve ever had to deal with personally you understand.  Under the circumstances, I thought Benjamin took it all pretty well and dealt with it in a relatively thoughtful way.  Dealing with adversity well is badass.