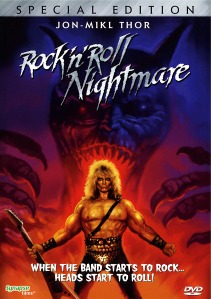 A hot new rock group… their sexy young girlfriends…  It should’ve been the best time of their lives, but it ended up being a “Rock ‘n’ Roll Nightmare”!  Recording some new music in an isolated farmhouse, the band gets more than they bargained for when something horrifying stirs in the darkness.  Eternal evil haunts this place and the band members start turning into demons from Hell itself!  After a day of making music – and making love – this band is starting to break up… one by one… limb by limb.  The bands lead singer, John (Jon-Mikl Thor) Triton, holds the key to defeating this horror once and for all… a secret that culminates in a battle between good and evil!  Triton versus the Devil himself!  This is it!  The hard rock cult sensation “Rock ‘n’ Roll Nightmare” finally explodes onto home video in this amazing Synapse Films Special Edition!  Available for the first time on DVD with rockin’ special features, a killer high-definition video transfer from the original negative and a brain-melting re-mastered 5.1 Dolby Digital soundtrack!  Featuring head-banging heavy-metal music by rock sensation Jon-Mikl Thor and some amazing visual and special make-up effects!

Bread is the spawn of the Devil.  It’s full of salt and shit calories, doesn’t fill you up one bit, tastes really nice and goes with everything.  Its one purpose is to make people fat.  I eat too much bread.  I can’t help it, I’m addicted to it.  There, I’ve said it now.  That’s the first step on the journey to recovery, so I’m regularly told at the Bread Eaters Anonymous meetings I attend.  Drugs, drink, smoking, gambling and Internet porn all pale into insignificance next to the horrors of a bread addiction.  Like cannabis, it comes it a range of different forms that can be utilised in many ways, loafs, baguettes, ciabattas, roti, French, soda, the list is endless.  Over nine million loafs are sold in the UK every day, as it invades 99% of households and infests them with its evil will, controlling minds and corrupting children in the form of sandwiches, baps and warm, crusty rolls.  That’s sick.  Like the Devil, it has a range of names, such as Allinson, Mother’s Pride, Hovis and Warburtons.  It even has a ‘good cop bad cop’ vibe, with the wholemeal vs white ‘thing’ going on.  It’s also got its own illness too, coeliac disease.  Bread will ultimately lead to the downfall of humans.  However, starting today I’m fighting back against this foul sputum of malevolence and bringer of despair.  Yes, it’s time for another one of my stupid, home-made diet plans!  From now on I’m not going to eat any bread, unless I make it myself.  Let it do its worst, I’m ready for it.  This movie is also about dealing with the Devil.

This is a film that tries to present its main characters as a kick-ass, mother of a rock band.  Indeed, Jon-Mikl Thor is such a character for real and has a bigger chest than most women.   Sadly, as everyone now knows, 80’s ‘rock bands’ were nothing but posers with big hair, who wrote uniformly crap songs.  Like monkeys on typewriters, they occasionally produced something worth listening to, but generally the results were not pretty.  This film does nothing to challenge that observation.  However, its worst offence is to have the band’s leader exhibit all the rock and roll excess of a successful estate agent.  I’m pretty sure that at one point he said everyone should get a good night’s sleep and then did some washing up.  WTF?  Very much a B-movie, this does have some good points, but a lot of it really isn’t that great.  It is a bit endearing in its own way though and I’ve got a soft spot for films about bands and music.  I don’t want to spoil the ending, but it had a twist that is even worse than, “then he woke up and found it was all just a dream”.  Really, it’s that ridiculous.  It’s like they started making the film, decided it was a bit crap, so changed the plot entirely and ended up with something even worse.  Ironically, the DVD looks really good and has a nice cover and loads of extra.  Don’t forget to watch out for the ‘rubber starfish’ too.  Rather frighteningly, it has a sequel lurking out there somewhere.

As a film that’s focused on a band, the music ought to be as important as the characters.  There is a fair amount in it, but sadly it’s firmly grounded in the worst horrors of its time and place.  Prepare to be scared, very scared.

Recommended for bad motherfuckers, rock bands, hairdressers and the Devil.

Top badass moment?  John Triton fights and defeats the Devil.  Well I’m not sure about you, but I can’t help thinking that’s pretty badass.   Even Arnold Schwarzenegger struggled with that.

This film doesn’t seem to have a trailer, but this music video is sort of one.  But if you want to hear a really good song called “Energy“, check out this one by the Buzzcocks.