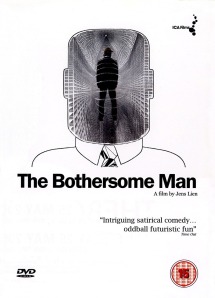 I spent this afternoon working, updating my financial budgets.  I seem to spend an inordinate amount of time on these, yet somehow they never seem to be quite up to date or accurate enough for anyone.  Numbers on a spreadsheet, there must be more to life than adding up endless numbers on a spreadsheet.  It doesn’t achieve or change anything.  A chief executive of a small, community regeneration charity in London once told me that “regeneration was invented to keep the liberal middle-classes happy”.  I think she meant projects that are set up to make a difference to people don’t really achieve much, but keep a lot of the latter group in jobs that make them feel good about what they do.  This film offers a similar view of the world.  Its main character Andreas even spends his days in an office adding up numbers on a computer screen.  Oh God, I think I’ve become him!  I need to go find a window and throw myself out of it; (which someone in this film appears to do as well.)

If you don’t like films with neat, tidy endings, or that make it clear what they’re about, then you’ll probably hate this one.  I viewed it as a statement on the mundane, superficial and uncaring lifestyles that many of us live these days, but maybe that’s just me.  As someone whose way of life is tissue-paper thin and pretty meaningless, I could relate to it.  A mindfuck of a movie, this is a nicely made black comedy that’s well worth a watch.  The snogging scene at the beginning is really quite disturbing and sets the tone for the rest of the movie.  The best bit of escape tunnelling I’ve seen since “The Great Escape” too; and a much better plan than trying to play with subway trains.  The more I’ve thought about it since I watched it a few days ago, the better it seems to become.  It represents 20% of my entire Norwegian film collection as well.

Recommended for people who enjoy thinking about the films they watch.

No cats, decapitations or chainsaws.  However, at one point a finger does get amputated by an office guillotine machine.

Top badass moment?  Andreas digging a tunnel to try to escape from his mundane life.  Despite being frequently surrounded by the mundane myself, it’s something I’ve personally never considered doing.  Trying to escape from the mundane is badass.