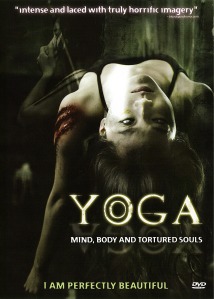 Striving for the ultimate inner beauty can be deadly.  Six gorgeous yet narcissistic women, driven by their superficial existence, are lured to the most prestigious underground yoga studio.  Their desire for beauty holds no bonds and each will stop at nothing to achieve it.  As they settle in the studio and begin their quest, strange and disturbing events start taking place.  Girls start disappearing and it is evident there’s an evil presence among them.  Their quest for beauty brought them to this haunted studio; their will to survive is the only thing that can get them out.

My campaign to get fit, live forever, save the planet and save money, literally took a giant step forward this week, when for four days in a row I walked to work and back, a total of nearly 20 miles!  To celebrate this and mitigate the worrying fact that I may be turning into some sort of boring, fitness junkie, today I ordered a giant Indian takeaway for my dinner, complete with beer.  Oh well, it’s back to the starting line next week.  This film is about something not altogether dissimilar.

Like me, this movie is all about people who only care how they can use their looks to get on in life.  Consequently, it’s hard to sympathise with them when they start to ‘disappear’.  They’re simply obsessed with being bitchy in the way adults are and being more beautiful than anyone else.  They can’t even follow the yoga teacher’s simple rules.  It doesn’t help that all of them are already gorgeous looking anyway.  It’s very much an ironic case of, tough, but you can’t have your cake and eat it.  Outside of its six babes, this is a movie that looks good, in a gloomy, haunted house kind of way, but commits the number one sin for a horror; it’s simply not scary.  After I’d watched it, I didn’t have any problems going to the toilet via the dark hall outside my living room.  The best horrors can have me checking inside the shower and not turning my back on the bathroom door, ‘just in case’.  Testing the lock on the front door and looking inside the wardrobe are not unheard of either.  It’s passable as a film to spend an evening watching, but its lack of really scary stuff makes it quite boring at times.

Music.  There isn’t much, although it’s so forgettable that I’ve forgotten about it already.

Top badass moment? Near the end of the film, Hyo-jung is in a subway station, where she starts to see people she thinks are dead.  The symbolism of it was all rather lost on me. However, at precisely 1:33:37 she lets out a wonderful, nine second long scream.  A great bit of movie mini-magic, which therefore makes it badass.  You’d never guess she had lungs that big.