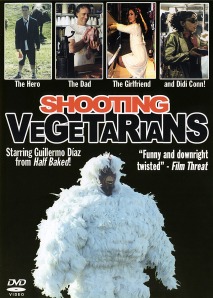 Neil (Guillermo Diaz) has been a vegetarian for one thousand two hundred and sixty-three days.  He and his girlfriend Daisy like to spend their days skateboarding, drinking organic coffee, and driving around talking about the state of the world.  Their idyllic existence is shattered when Neil’s father, Vic, reveals his grand plan for Neil to become a third generation butcher and work with him in the Father and Son butcher shop.  With no job to support himself and nowhere else to live, Neil is left with little choice but to report to work with his father.  Faced with the bloody reality of slabs of dead meat, Neil runs screaming from the shop, and keeps running and running and running, until he ends up in a deserted skateboard park.  There he has a visionary encounter with a Chicken Man, who kicks his ass and shows him how hypocritical his pseudo-political lifestyle has been.  With the Chicken Man’s inspirational words ringing in his head, “You know what you are supposed to do,” Neil returns to his life with a mission to change the world.

As we all know, vegans are inherently more intelligent and all-around better than anyone else.  We also know that we’ll eventually inherit the Earth too; (I’m afraid the meek will just have to piss off down the job centre and look for something else to do).  True, it will probably resemble the inside of a Chinese takeaway’s wheelie bin by then, but it’s the principle that’s important here.  We look upon mere vegetarians as uneducated children, people with the potential to become civilised, but who have many dark sides to overcome and quests they need to undertake, before they attain true enlightenment.  Yes, I know there’re a lot more vegetarians about than vegans but really, they’re a bit like the Lib Dems, no one takes them seriously do they?  One pizza or the whiff of bacon cooking and they’re slobbering like a St. Bernard, apologising for their dietary ‘aberration’, in an attempt to appease their cannibalistic, meat-eating friends, in case the latter get offended.  If a vegan walks into a room, people take notice; think The Terminator.  (That’s probably not the best analogy, but it’s all I can come up with right now.)  When I walk into a room, people make their excuses and leave.  If I spot a non-vegan woman who I feel shows ‘potential’ and I explain to her that as a vegan we can’t actually breed as we’re basically different species so it’s okay for us to ‘do stuff’ together, she will inevitably make her excuses and leave too.  I guess the offer is just too awesome and mind-blowing for them to cope with.   I can appreciate that viewpoint; I have each and every one of the 453 times it’s happened.  This film is about a mere vegetarian.  One who realises that trying to negotiate your enemy into surrender isn’t always possible.

A lot of the time there’s not much really going on in this drama/comedy/horror; the characters mostly sit around and talk about uninteresting stuff.  In fact it’s so bad, Neil even speaks directly to the viewers, to give us some insight into what he’s thinking.  There aren’t a lot of films like that.  There aren’t a lot of films without a trailer either, but I think this might be one of them.  Actually, I think Neil is probably a sociopath; he really doesn’t seem to care a lot about those around him, even his family, girlfriend and best mate.  He looks like he does but really, it’s all for show.  A typical, serial killer personality trait.  I personally blame it on all the milk and cheese he probably eats.  I suspect there’s a tendency for all vegetarians to be that way inclined; can eat this, can’t eat that, I’m a lacto-ovo-talkbollocksaboutfoodo vegetarian so I can basically decide what I eat depending on what mood I’m in, etc.  It’s so complicated, no wonder it messes with their heads.  All that angst and guilt about everything.  Even the word vegetarian is (if you’ll excuse the pun) a mouthful; does it really need five syllables?  And vegetarianism?  That’s seven.  By the time you’ve explained what you are to someone and what you can and can’t eat, you’ll have starved to death.  No wonder they’re all so thin.  Look what happened to Robocop in “Robocop 2” when he had too many Prime Directives to deal with.  They should all just be vegan, it’s a whole lot simpler; if you like it you can’t eat it. Even I can understand that.  Oh the film? Actually it’s not bad at all; I’ve probably made it sound worse than it is.

The film sports a great soundtrack made up of songs by numerous and mostly obscure punk rock bands.  It’s good.

One cat, no chainsaws or decapitations.  There’s a cute cat on a cushion in a pet shop, which does have to do a bit of acting.  Stretching your paws out take real timing and effort to look good.

Top badass moment?  In the most poorly hidden plot development of the century (especially as I’m about to blab it now), vegetarian Neil kills his butcher father and feeds him to the customers.  Sorry, but that automatically qualifies as badass, regardless of the moral implications. 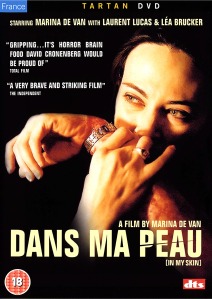 Far be it for me to ever admit I have any sort of imperfections, but up until a few years ago I used to bite my nails.  Then one day I realised I’d more or less stopped doing it.  Weird isn’t it?  I’ve no idea what made me stop, but there you go.  One of life’s little mysteries.  This isn’t really a film about biting fingernails, which is probably a positive thing as I can’t imagine it would be very entertaining if it was.  It’s more about someone who’s ambitious at work, who over-stretches herself and as a result of an accident at a partly, starts to self-harm in increasingly extreme ways.  I really wanted to feel sorry for Esther, the main character in this movie.  After all, she clearly has some big issues she needs to deal with and I’m a nice, caring person; no, really I am.  Trouble is, she was basically a selfish bitch and I got the feeling she always had been.  Decent job, caring boyfriend, intelligent, but still managing to be a bitch to everyone, but in that sneaky way only the clever ones can be.  She also uses these same ‘skills’ to hide her new ‘hobby’ from those around her, or at least hide enough of what she does to give them an excuse not to do anything to help her, because that’s easier isn’t it?  I bet they felt pretty bad about it all after the film ended (if that makes any sense)?  Not that I liked any of them really, not my type at all.  Pretty boring, dull, unpleasant people the lot of them.

This is an interesting, intense, French horror.  It’s weird how a country that managed to invent a type of bread that’s so impractical it doesn’t actually fit into anyone’s shopping bag (stupid or what), also manages to produce some really great horrors.  Its self-harming scenes are genuinely unsettling; it’s the sound and the look on Esther’s face more than just simply the gory bits.  It has very good effects and it has to be said the acting is excellent too.  I was glad I hadn’t eaten before watching it.  The scene with the arm during the meal in the restaurant is a bit surreal though and sort of doesn’t quite fit in with the tone of the rest of the film.

Top badass moment?  In the words of the Smiths, “I tried but I failed”.  There’re no characters in this movie with enough redeeming qualities to qualify them as badass.  They weren’t exactly bad, but none had that self-sacrificing ‘hero quality’ that I was looking for. Move along now, nothing to see here; just a lot of flawed humans.